Anthony Grumbine is the youngest architect ever to be named a principal at Harrison Design. He leads the firm’s Santa Barbara office, which was established in 2004. He was recently honored as part of Building Design + Construction’s “40 Under 40” Class of 2018. 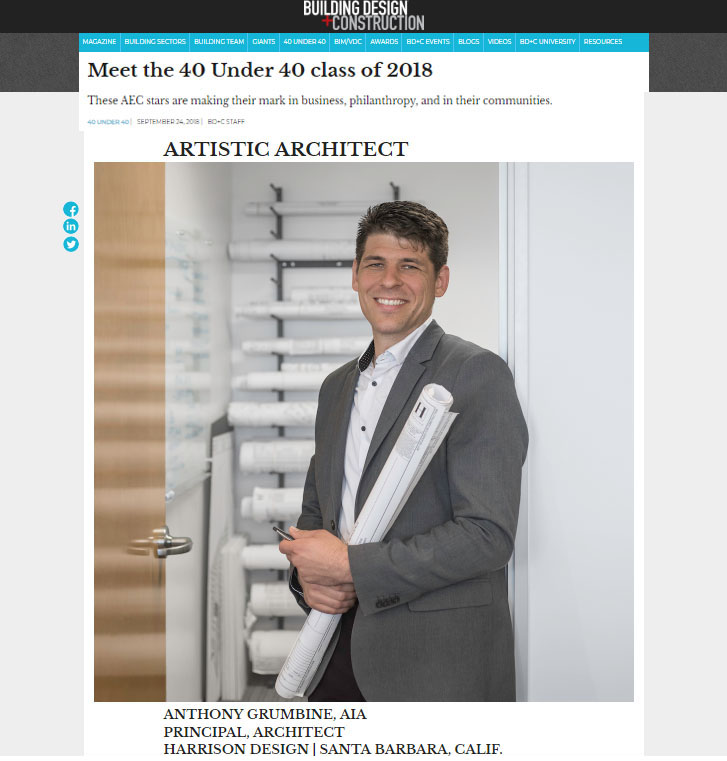 The award, which was introduced in 2006, honors 40 “rising stars” in architecture and engineering. This year, the honorees are invited to celebrate the award at an event on Nov. 14 during the Greenbuild Conference in Chicago.

Anthony cited his work on award-winning projects, such as Crocker Row – No. 5, which in 2014 received the Edwards & Plunket Award for exemplary renovation, restoration and rehabilitation of a historic structure—the first year the award was granted. It also earned the 2016 AIA – Santa Barbara Honor Award in historic preservation.

He highlighted the firm’s renovation of the Holy Innocents Catholic Church in Long Beach, Calif., which initiated the formation of Harrison Design’s sacred architecture studio, which Anthony leads with architect Nic Charbonneau in the Washington, D.C. office.

A teacher, lecturer, artist and community volunteer, Anthony credits the mentorship of Anthony Spann, who founded the West coast office, and Barbara Lowenthal, a West coast principal and head of interior design, whose mutual devotion to the community and civic participation and leadership inspires him. Anthony is a member of the historic resources committee of the Santa Barbara Trust for Historic Preservation, an Institute of Classical Architecture and Art lecturer and instructor, and frequent writer and contributor to local publications on Santa Barbara’s architectural history.